I made this moving timelapse on the return trip to Durango from Cascade Canyon by mounting my trusty Cullmann clamp to a grab iron, and mounting my G9 onto the clamp. 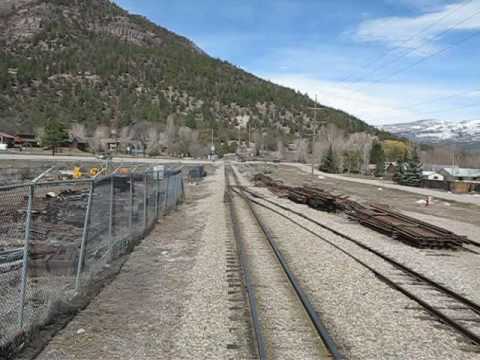 A Trip to the DMV

Whelp, since it is my birthday tomorrow, I was under some obligation to visit the DMV to renew my driver’s license.

For years, I’ve been going to Maplewood City Hall for sheer simplicity. There are never more than a handful of people there, and it’s typically easy to get in and out of there in under five minutes. The only catch is that you have to remember to bring cash; it’s 2010, and they have no ability to take credit or debit cards. On the other hand, they do have a rather convenient ATM in the lobby with likely large fees. Oh well, times is hard.

Of course, I went there by bike.  City Hall is a few feet off the Gateway Trail.

There were more people there than usual, but that’s okay, I had to fill out a form while I waited. How much do I weigh now? 200?  Gee, my old license says 230! Not bad!

Eventually, just as I was about to pull out the crossword, my number was called, I turned in my rather sweaty, crumpled up $24, and was directed over to the eye test. Man, you’d have to be practically blind not to pass that.

Next, I was asked to sign my application. I started to take out my space pen, but the woman insisted that I use her pen. Okay, I suppose it has something to do with how the signature will ultimately appear on the new license, but even so, I got halfway through my first name, and it crapped out. I had to retrace, and it looked like crap. Nothing like my signature at all, really.

Finally, the dreaded photograph. This is much less painful nowadays; since it’s all digital, they can shoot as many as it takes until it looks good. Except that since I had ridden there, my hair was all over the map, and without a comb, there wasn’t much I could do about that. Oh well, think it will be okay.